We have seen some very high prices (£200/MWh) in the prompt market this week, due to a high pressure weather system resulting in temperatures plummeting and wind generation crashing to well below forecasted levels. Last week we saw national wind generation almost reach 15GW, whereas this week,  generation has been as low as 0.25GW.

This has combined with temperatures far below seasonal expectation which has resulted in an increased demand for power. When wind generation is this low it increases reliance on CCGT’s and national de-rated capacity is stretched very thinly. The de-rated margin is the amount of excess supply above peak demand. On Monday evening the de-rated margin was only 2GW, compared to almost 15GW a week ago. This has meant that demand has been driving market prices, and whenever there has been stronger than expected demand there has been a resultant spike in prices. We have seen system prices as high as £1971/MWh during the evening peak of the 12th, as a result of the stress the system has been under. Day Ahead spreads have also seen an impressive increase due to these lower winds, where the highest price minus the lowest price on the 13th and 14th was well over £100/MWh.

The STOR market is back in operation following a redesign of the tendering in order for it to comply with the European Clean Energy Package; this is a Day Ahead auction. This week we have seen the highest prices so far, up to £6.50/MWh as an availability payment, largely due to the volatile market. Since the release of this product, we have noticed that it has been linked to Day Ahead prices and system tightness.

The carbon and gas charge continues

Another week, another record high price for carbon. The carbon price stayed pretty flat for the first half of this week but jumped by almost a Euro between Tuesday and Thursday and is now sitting at €44.31/mt.

Gas prices have also increased this week by 4.44p/therm for the front month, this is potentially a result of growing tensions between Russia and Ukraine which could of disrupt the gas flow into Europe.

Next week is looking like a more balanced week, with temperatures and wind generation slowly going back up to seasonal norms. Availability is set to increase for Biomass but drop slightly for CCGT, however the UK power system still looks well supplied for next week. 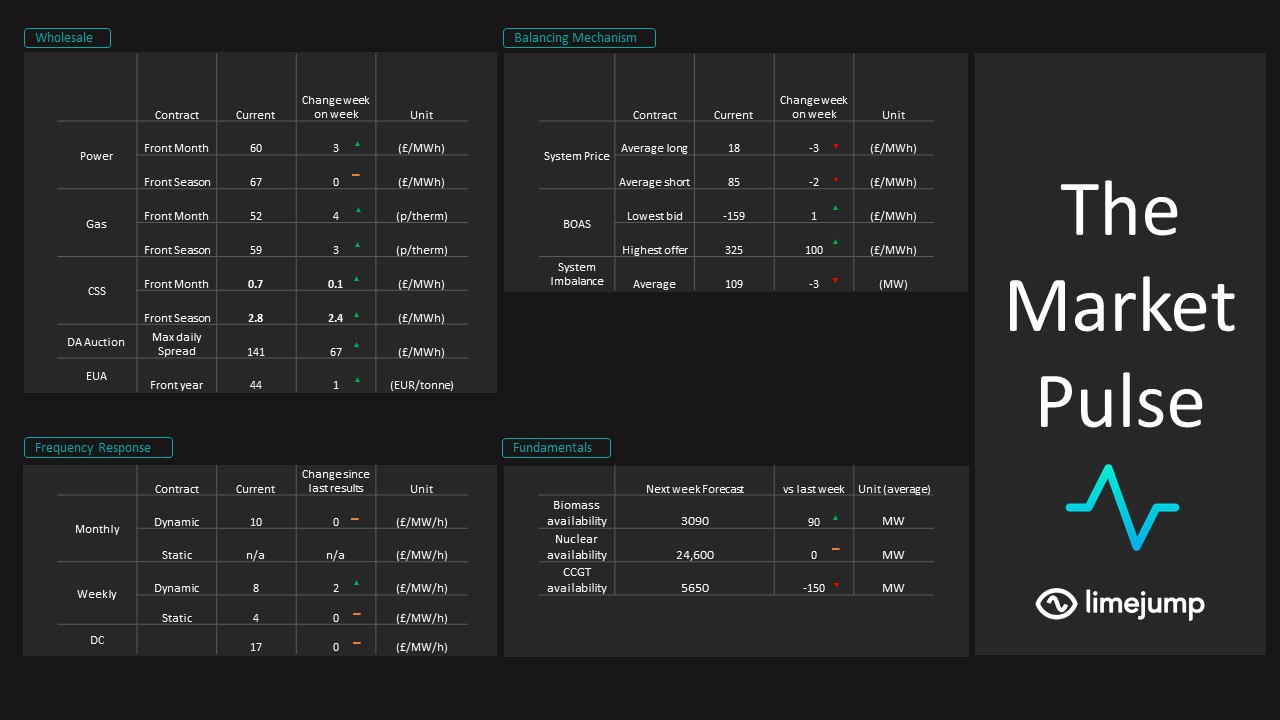