Friday’s blackouts: A Domino energy effect in action, and how the energy sector can prevent this happening again

On Friday 9 August, just before 1700, National Grid oversaw a sharp system frequency drop following the trip of Little Barford gas-fired power station which was generating roughly 700MW at the time. This has been referred to on social media as the #powercut. 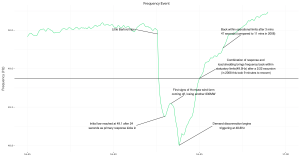 Of itself, a 700MW loss of generation is not uncommon and is a planned for event. It happens frequently, and we barely notice as the system responds seamlessly. In fact, just this summer we have seen several trips on interconnectors to Europe, some as large as 1000MW and on Thursday, 8 August Peterhead gas-fired power station tripped, which was also generating about 700MW at the time. 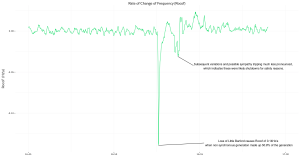 But on Friday that trip looks to have triggered a series of events that led to widespread power outages. Why?

The generation mix in the UK at the time of the trip was 50.8% from non-synchronous sources (principally made up of Wind, Solar and imports from Europe via our Interconnectors), these were not providing any inertia to the system.  At precisely 16:52:34 when Little Barford went offline the low inertia system was thrown off-kilter, and system frequency dramatically slowed, it dropped outside of the statutory operating limits of 49.5-50.5Hz within 4 seconds.

This is also shown in the Rate of Change of Frequency (RoCoF) increasing quickly from c0 Hz/S to 0.14 Hz/s in the chart above. Historically any RoCoF higher than 0.125 Hz/s would in many cases trigger assets at the distribution level, this was then increased in 2012 to a range between 0.5 and 1 Hz/s requiring a response in less than 0.5 seconds. Currently, there are no RoCoF services procured except for those required as part of G59 on the distribution system.

In just 8 seconds the frequency was already at 49.1Hz. It’s these 8 seconds and the following 30 seconds where the country seems to have had a prevention window.

Normal response products procured by National Grid took effect, and within c.10 seconds the fall in frequency was halted and 30 seconds after the trip, frequency seemed to begin recovery back to a healthy level as highlighted in charts above.

From looking at the frequency trace data, however, this still wasn’t fast enough, and it then looks like Hornsea offshore windfarm tripped – potentially in response to the low frequency (this is being formally investigated by National Grid and we will know facts in due course as the current statement is that this was all a single event). This overloaded the total amount of impact as now we had lost a total of nearly 1500MW, whereas National Grid only plans to cover the largest system loss (currently still Sizewell B at 1200MW). This cascading effect then triggered a set of automated protocols by shutting off demand load on the system as frequency fell to 48.8Hz and immediately reversed the decline in frequency and helped stabilise the rest of the country, after which new generation answered the call to also come online as well. All in all, it took c20 mins from the first trigger to all power restored. However, it’s the actions in the first 8 seconds that requires our attention when it comes to ensuring this doesn’t happen again.

Investigations will now take place, but from what we know so far from the analysis of our own data, there are three things that we believe should be done to remove the risk of this happening again.

1: Procure and deliver a larger amount of faster-acting frequency response

Firm Frequency Response has a huge role to play in system resilience. Response that delivers full power faster than 10 seconds is critical to arrest the fall in frequency during such an event. In 2016 National Grid did procure 200 MW of Enhanced Frequency Response which responds in 0.5 seconds vs 10 seconds for Primary FFR.  However, in 2017, they did reduce their volume requirement for FFR. Valuable, non-synchronous generation will continue to come online, and there must be increased procurement of FFR-style products with a regulatory framework that supports these.  Possibly doubling of the FFR service could have helped mitigate this event at a total cost of c£100 Million per annum.

2: Create more inertia or limit the largest losses on the system

Currently, the cheapest way of securing the system against low inertia is to trade back the largest losses on the system at the time. However, this is not an enduring solution. Creating increased amounts of inertia in the system, without firing up polluting fossil fuel plants (i.e. non-mechanical or synthetic inertia), provides an excellent safeguard for our modern fuel mix. There are two principal synthetic options to this – one, add more batteries and demand-side response, or two, force all non-synchronous generation to provide synthetic inertia via their invertors.  All of this is possible today.

The standout out result from Friday’s 9 August event, apart from the blackouts was the comparative calm on the wholesale electricity markets, even the system prices showed no response to this event. The fact the whole event was essentially recovered inside 4 minutes meant that many power traders wouldn’t have even noticed the event if they weren’t looking at the frequency trace. Shedding load brought the national system into balance such that large volumes of additional generation were then not immediately required. A market that incentivises a reaction would reduce the strain on the system operator and likely provide a more efficient result to the end consumer, there are many possibilities here, like shorter settlement windows or commercial mechanisms that would force a reaction from asset-backed traders.

Above all, we need to build a system that can cope and design a market structure that is fit for modern generation and can adequately support the push towards net-zero carbon and mitigate a far worse situation of cataclysmic climate change.

It’s important to keep in mind that a slow-down or reduction in our fight against climate change will create far worse consequences in the long term for our planet, society, economy and future generations than the most recent problems experienced in the blackout on Friday.  It would be irresponsible to even for a moment assume that this in someway should halt the deployment of renewables. As we discussed earlier, the technological solutions to bring increased battery storage and renewable assets into the UK energy system are available now, and the industry innovation required to make decisive change is underway. From a current market standpoint and from a technical perspective, the issues from Friday are preventable, and we will all find a way to create a resilient, sustainable power system.