On Monday 3rd May, there was a new record for wind generation. In the middle of the afternoon, wind turbines generated more than 17.6GW of electricity, breaking the previous record by 0.1GW – equating to 48.5% of the energy on the grid (the record for highest % share of the energy mix still stands at 59.9% from August 26th 2020). Another record was broken on Monday, with it being confirmed as the coldest May Bank Holiday in 43 years. This meant that despite the very strong winds, system prices spiked above £100/MWh and the more expensive gas peakers were called upon to deal with demand being 10% above forecast. High winds continued on Tuesday and resulted in negative system prices, as low as -£49.99/MWh, for 7 settlement periods. Since Tuesday, the combination of low wind and high temperatures that have been all too familiar recently returned with a wind forecast to drop below 1GW on Friday evening. There have also been multiple trips throughout the week, putting further pressure on the system and resulting in system prices regularly spiking over £150/MWh.

On Tuesday 4th, Carbon broke the €50/mt barrier for the first time. This means that it has risen by 50% in 2021 alone. After reaching €50/mt there was a slight drop off, but by Thursday it had gone back above Tuesday’s high. This continued surge has been further helped by speculators and late compliance investors continuing to buy these carbon credits – Great news for Limejump customers as it continues to drive up power prices within the UK market. With the surge showing no signs of slowing down, it seems the only way this may halt would be through some sort of political intervention. High carbon prices are an excellent way of putting financial pressure on reducing emissions, but gas still plays an indispensable role in our energy mix. The effect of higher power prices rests solely on the consumer who will have to pay more for their electricity. It’s a very difficult balancing act between accelerating the green revolution and looking after those who will be disproportionately affected by these higher power prices.

Gas prices have continued to rise due to the abnormally cold weather, with gas supplies dropping lower and lower at a time when they are usually being topped up. This is having a significant impact on winter power prices, with forward prices already reaching £110/MWh in December which is extraordinary for over six months in advance.

Protests by French boats regarding new fishing rules off the coast of Jersey have now subsided. However, earlier in the week there were threats to cut electricity to Jersey, which receives 95% of its electricity from the interconnector. Although this will no doubt go down as a small case of teething issues surrounding Brexit, it does highlight the potential power France has in regards to the interconnector. Currently, there is 3GW of interconnectors between France and the UK, with another GW expected to be operational next year. In 2020, power from these interconnectors only represented about 6.3% of final UK consumption. However, during the winter when cold temperatures combine with low winds the UK is heavily reliant on these Interconnectors. Contention over interconnectors could create real issues within the UK electricity system.

The forecast for next week suggests healthier wind and slightly increased temperatures. Whilst wind is looking to provide above seasonal expectation next week, peaking at 13GW on Saturday, temperatures are still below what would be expected in May. We expect solar generation to return following a week of overcast conditions. It is important to note that there is currently a high-pressure system making its way across Europe which means that these forecasts could change day on day. There is meant to be an improvement in availability in the middle of next week, but Nuclear often suffers delays from restarts so this may not be the case. CCGT availability continues to drop, falling 1.5GW as plants go on scheduled maintenance. 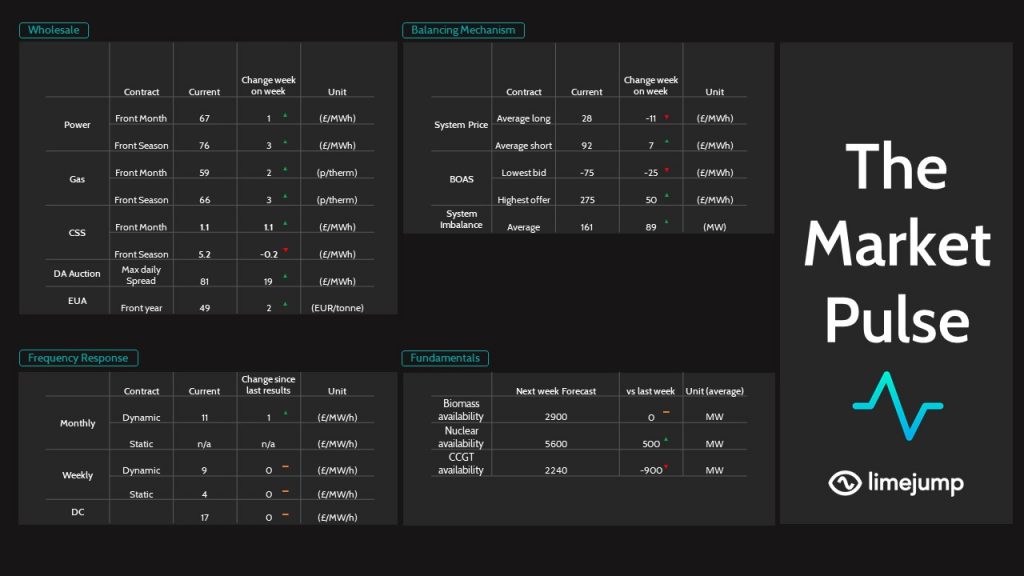 This week: High solar generation and the second UKA auction clears at £44.75/mt